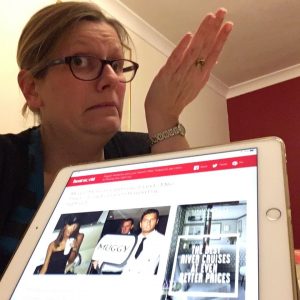 I used to be quite good on the celebs. I watched the soaps. I watched reality shows. I knew what films were in the cinema. “Love It!” magazine was stacked welcomingly in my bathroom. (Yes, bathroom. Well, this WAS the time before smart phones.)

And then… something happened. One by one I dropped  the soaps. Then the magazines. Then the reality shows. And in the mean time, celebs were spawning* like shiny, superficial, bunnies. People got famous for being able to put their make-up on quite well. Or for allowing their actual life to be scripted and filmed. And me… well I started a family, free time became a scarcity, but more than anything – I just stopped caring. Was this a reaction to the burgeoning shallowness of society? Nah. Expect it was just my age.

*There’s far too much Minecraft in my house.

Show me a celebrity

I’m forty-one, a wife, a mum,
“But hey!” I cry, “I still feel young!
My hair’s not grey, my teeth are mine,
I’d DEFO pass for thirty-nine!”
But sadly, there’s a tiny flaw,
That gives my age away for sure,
Yep – show me a celebrity,

It’s not fair game, they’re all the same,
The women with their shiny manes,
The blokes all buff with facial fluff,
Both sexes caked in orange stuff,
So how am I supposed to know,
Which one’s Georgia Toffolo,
Charlotte Crosby, Stephen Bear,

Who ARE these people? Should I care?!

Cos who has time for reading Heat,
or watching Coronation Street,
And working out who sings each song?
Got too much on! It takes too long!
There’s more to life than people who
I’ve never met. And don’t want to.
So – forty-one. Still young? Still fun?

Nope. I’ve turned into my Mum.