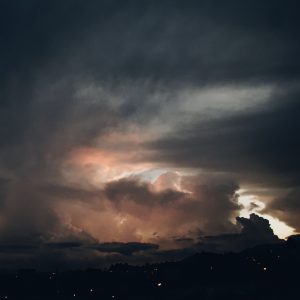 We’ve had some full-on weather over the past few days, and the night before last, the wind was really eerie. So I thought, why not freak everyone out a little bit more with a seriously creeeepy poem? You’re welcome.

The dusk hangs all jowly with menace and blood, the air
Shudders with creeping despair as the heave
Of the laden sky speaks of decline and disease
And the trees, glancing anxiously heavenwards
Whisper a prayer.

All at once the sky yields to the merciless press
As a death rattle rips though its chest, it relents
And the wind, too impatient for fanciful gusts
Simply ROARS. Timbers creak, while the curtain is thrust
In and out of the room with a suck like a labouring
Lung, and the carefully collated possessions we’ve gained
In our small, boxed-up years are snatched up with disdain
To be smashed on the walls of the dreams we were sold
Thinking we were the ones in control.

Then the rain comes in waves like the souls of the drowned
Streaking angrily back from the clouds, down and down
With revenge in their water-logged eyes. “HAVE A CARE!”
Scream the clattering bins and the torrents that pour
From the gutters, the walls that stand battered and sore
And the gardens that shiver as cold, laughing shadows
Wash light from their life-giving skies.

Photo by SHTTEFAN on Unsplash 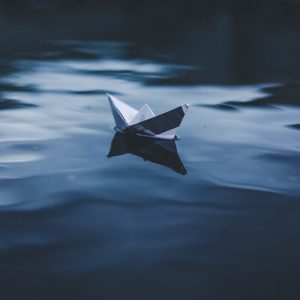 Take me away, said the mariner girl,
From the islands of ought-to which circle the sea,
Let me be lady and lord of my world,
And let all obligation sink gladly from me.

The valleys are flowing with nonsense and noise,
As the hills raise their heads to command and cajole,
The air is a millstone which crushes my joys,
I will sail from the land, or else forfeit my soul.

Send me a star, said the mariner girl,
To blaze through my darkness and show me a path
Through the waves, to a place where my mind can unfurl –
Just me, and the sea, and my brave little craft.

The currents are flowing with maybe and might,
And the swells are a surge of why-not and just-be,
The salty-skinned air gives a kiss of delight,
As I sail from the land and join hands with the sea.

Farewell to you, restless mariner girl,
For I’ve neither a boat, nor the courage to sail,
As the land keeps me bound, so the sea claims its pearl,
But your spirit shines on in this dream-spinner’s tale.

Photo by Ahmed zayan on Unsplash 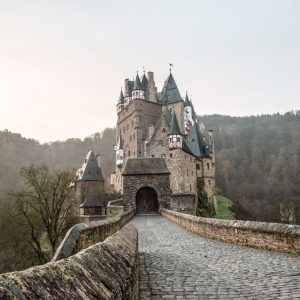 The Elves and the Shoemaker
Business lacks clout
Shorties help out

Beauty and the Beast
Loving what’s ugly
Renders it lovely 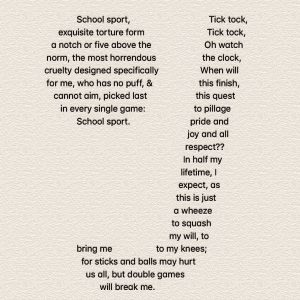 This a “concrete” poem – a poem shaped like the thing it’s describing. If it doesn’t look like the picture above, turn your phone on its side or get a larger device (wink wink). Now – gym knickers on, and let’s proceed. 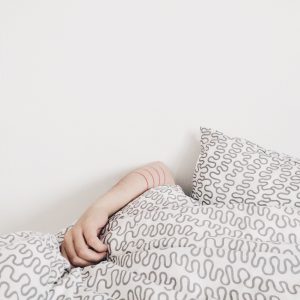