My Gran, Rosalie Riggs (later Rosalie Wither) worked as a nurse on hospital train from 1940 – 1942. The hospital trains transported injured soldiers who had come home from the front to hospitals all over rural Britain. The carriages were converted to hold two layers of beds on each side, with the nurses working in between. Journeys were often long with track bombings, diversions and long waits in sidings to allow armaments trains through.

In 1942, Gran was discharged from the Red Cross on health grounds. In photos from that time, we can see she had lost a considerable amount of weight. Three weeks later she signed up for the Women’s Royal Air Force. She served at a base in North Wales for most of the rest of the war.

She married in 1943. My Grandad’s father had connections with the mill trade and worked for the Ministry of Supply, and managed to source some velvet fabric for her dress. – a real rarity in wartime. 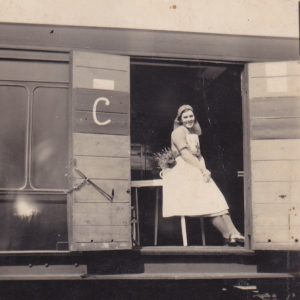 She was a white-toothed woman
bound to the run of the rails and the times
yet sharp as her hospital corners.

She was a force of defiance
with a cross to smite the viscous dark
that skirted the oily sidings.

Was starch fit for resisting
the muddied blood of khaki men
made shocking pink by shrapnel?

And did her apron’s brightness
bleach darkness from their hungry cheeks
and tiredness from her sockets?

She was a white-toothed woman.
In April, nineteen forty three,
she married in snowy velvet.

By the way, I couldn’t tell you how white my Gran’s teeth actually were. “White-toothed” is not a direct reference to the state of her dentistry. I can tell you however that she was formidable. 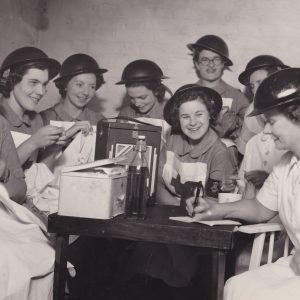 A hilariously staged photo of the nurses jollying through an air raid. Gran is on the left. I rather think I can see her contempt for this whole photographic shenanigans in her eyes! 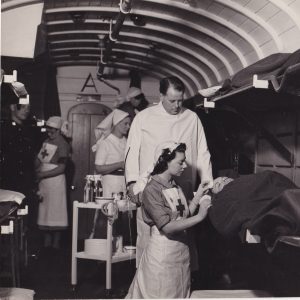 The interior of a typical hospital train

By the way, if you enjoy poetry, why not follow me at www.facebook.com/parmenterpoetry?