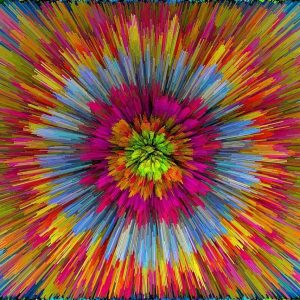 This week I have been mostly… blowing up all the pretty flowers! Or rather, they  have been blowing themselves up in some sort of petal-strewn apocalypse. This poem featured on the lovely blog The Wombwell Rainbow this week, but I thought I’d share the fireworks here too.

A celandine went first,
and if we had ever looked, we would have known
it was a freeze-frame of a live firework,
we would have expected
the violence that sparked from the inside out,
the heat petalling sweetly,
each stamen springing a hellmouth.

A rose caught,
thorns spitting pop-pop-pop from the stem,
the leaves crisping, and as an afterthought,
the buds, like charged kisses,
lipped the flames to ragwort and vetch.
An oxeye daisy burst,
white-hot in its eagerness.

We dialled nine-nine-nine,
we called the press, but our words burned away,
and as day bloomed into evening time,
the honeysuckle, its lashes
glowing in the last light of the sun,
tipped a long wink to Venus
and blew like an H-bomb.

Artwork by Thomas Suisse on Pixabay.