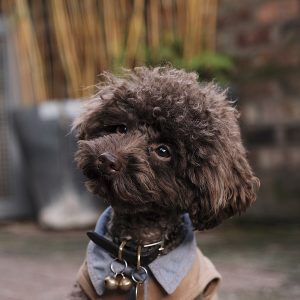 The eighties set fashion on fire,
That’s why it’s the look I desire!
So I’ve nailed it, long-term,
With a hot poodle perm,
Just like Brian May, Cher and Mariah.

Showed my stylist a photo of Whitney
She went ever so pale very quickly,
She got acid and bleach,
Three big drumfuls of each,
And some creosote. “Yes!” I cried, “Hit me!”

She slathered me, crisped me like crazy,
I said, “Hold up the mirror! Amaze me!”
And – woohoo and way-hay!
I was Jennifer Grey,
Ripe ‘n’ ready to woo Patrick Swayze!

But then – it all got rather strange,
For my poodle perm started to change,
Seems its poodle-dog mind
Was not noble or kind –
It was dirty, debauched and deranged!

My friends weren’t impressed. They’d cry “Wowzers!”
As my perm tried to dry-hump their trousers,
It would steal all their shoes,
Roll in animal poos –
I was banned from their elegant houses.

But soon they were howling with laughter,
It would jump in the lake – I’d go after!
Chasing kitties for kicks,
Going crazy for sticks,
My new perm was a doggy disaster!

It would seek other perms! It would spot em,
Bound up close, and then sniff round their bottom!
This all got me in trouble,
With Bon Jovi’s double,
Who called the police, which was rotten.

So now I’m awaiting the chop,
Down at “Woofterz”, the dog-grooming shop.
Well, I’ll no longer feel,
Like a smokin’ Brooke Shields,
But at least all the lawsuits will stop!