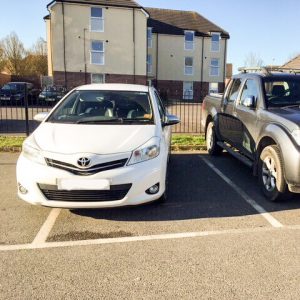 The image above shows a genuine example of my parking.

In this case, I stepped out of the car, took in the results of my work, pointed and laughed at myself, and then took a photo.

But that’s not the end of my… er…. talents when it comes to motoring…

I’m alright driving forwards, but I’m awful in reverse,
My turning skills are terrible, my parking skills are worse.
Whenever I move backwards, people hurry to disperse,
While someone calls a breakdown truck, a vicar – and a nurse.

I seem to lack the circuitry to know which way to steer,
And things are always closer than they actually appear,
Those parked beside me hover, as they sweat in mortal fear…
I fart about, the mean ones shout, the nice ones say… “oh dear.”

I’m terrified of places where the roads are single-track,
Cos a car might come the other way and force me to go back,
Careering blind from side to side, the hedges take a whack…
So please don’t swear, I WILL get there – I just don’t have the knack!

I’ve got a snazzy camera now, which shows me what’s behind,
It’s really great when going straight, but when I turn I find,
That I’m going left, the camera right, it makes my brain cells wind,
And a prang is much more likely with a whirling, swirling mind!

So I hit them in the car parks, and they hit me in the purse,
And I feel I’ll be afflicted with this mortifying curse,
Til the day they tell the driver as he parks my golden hearse…
That I’m alright driving forwards – but I’m awful in reverse.