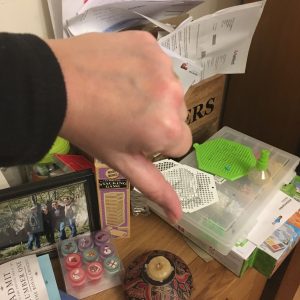 I hate clutter. That may surprise anyone who has ever visited my house. But what’s important to realise is that there is a difference between wanting a tidy house and being able to achieve it.

So it seems that I am doomed to wake up each day, vow to have A BIG TIDY UP, sometimes even achieve a middle-sized tidy up, and then go to bed wondering which house it was that I tidied earlier.

This poem,  if you’d be so kind, is to be read with a hint of insanity in the voice. Thank you so much.

Nothing makes me mutter more than clutter

Nothing makes me mutter more than clutter,
It’s the very ruination of my day,
My family, no doubt, really LOVE to get stuff out,

But I think they think it puts itself away.

I tell you, I’m not blessed with being domestic –
For tidiness, I’d give myself a six,
But my precious family would each earn themselves a three,

Which all adds up to a house which makes me twitch.

There are ninety-seven items in the kitchen,
Which are not where I intended them to be,
In the lounge there’s fifty-four, in the dining room there’s more,

There are pens and bills and helmets on the table,
There are bricks and cups and spanners on the drawers,
And upon the window sill, there’s a pile of stuff that will

Have to stay there til I work out what it’s for.

And I don’t know how much longer I can cope.

So I’ve tidied and I’ve picked up and I’ve kicked up,
I’ve ranted til I’m purple in the face,
But as soon as somewhere’s clear, there’s just one sound I will hear…

The clatter as more clutter takes its place.

By the way – if you were thrown by the word “guff”, do let me know – I’m not sure if this delightful term for a fart is only understood by those who were around seven years old in 1984. Could even be a Somerset thing, I’m not sure!

I do have in my pocket the alternative line “There is barely any fart-room in the bathroom – which I quite like – but I was swayed by the opportunity to say “guff” for the first time in around twenty years!

4 Replies to “Nothing makes me mutter more than clutter”